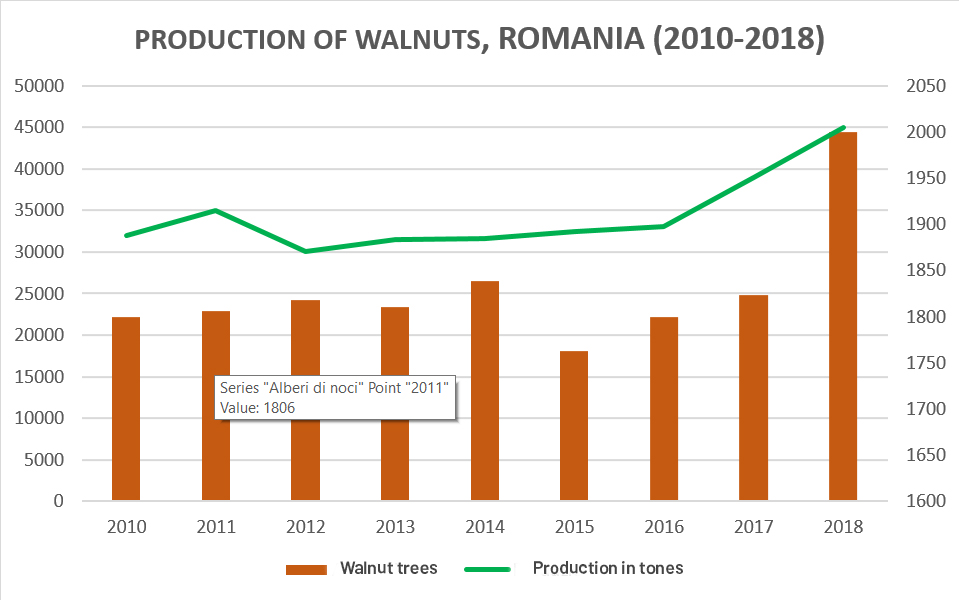 Overview of the Agricultural Sector in Romania

Potential of the agricultural sector in Romania

The agricultural sector in Romania has a very high potential. The country total production value increased by 12.5% in 2017 compared to the previous year – equal to 78.5 billion RON, or 17.2 billion EUR, according to data analyses by the INS (National Statistics Institute). The country has the sixth surface level dedicated to agriculture in the EU - 13.9 million hectare - after France, Spain, UK, Germany and Poland (PwC Romania). The Agricultural sector in Romania engages around 30% of the workforce of the country and it contributes to 7.9% of the total GDP of the country, a very high level considering that the European average covers only 1.9%. The majority of the land is dedicated to cereal cropping (23.6%) and it covers 2/3 of the total agricultural land. Grain production represented over a third (34.8%) of the whole crop production. Sunflower seed has also an extensive exploitation, Romania indeed is positioned as one of the top producer in the EU. Vegetables, with a particular large production of cabbages, onions, potatoes, green peppers and tomatoes are also cultivated around the cities of Timișoara, Arad, Craiova, Galați, Brăila and Bucharest. The agricultural sector in Romania offers a relevant wine industry too. Thanks to its large export, Romania, indeed, can be considered one of the most important wine-producing country of Europe. The most famous vineyards are located in the area of Odobesti, Panciu, and Nicoresti.

Challenges of the agricultural sector in Romania

The agricultural sector in Romania has past various historical period and the last relevant changed was defined in 2014 when a new law has completely liberalized the acquisition of agricultural lands to foreign investors (law n. 17/2014). This new law has accelerated the innovation and mechanisation process of the agricultural sector in Romania, but the general productivity remains still too low. A side-effect of this new law is the so-called “land grabbing” which has created a high concentration of power and a monopoly in the sector. According to a research developed by the Institute TNI (www.tni.org/en) the 0.4% of the Romanian agricultural companies own more than 48% of the lands. In addition to this, there are other main problems to solve: in Romania there is a spread tax evasion, there is lack of training among farmers and the low level of capitalisation of the sector.

The future of the European Union in the hands of Romania

The Presidency of the European Council is now in the hands of Romania. For the first time in the history, from January to June 2019, Romania will lead the semester of the European Council trying to limit the consequences of the Brexit process which is foreseen to be concluded in March 2019. The challenge will be even more complicated considering that yesterday the UK Parliament rejects the Brexit May’s agreement developed in the last months with the European Union. Viorica Dancila, the First Minister of Romania declared that the main goal of the Romanian Presidency will be to keep united the European Union. Indeed, Brexit without any agreement could strongly impact our life and economy. If this happens European citizens leaving in UK (and vice-versa), businesses and public authorities would have to act instantaneously to changes as result of leaving the European Union. Thus, the goal of Romania is very important and it will be focus on the results of the upcoming European Parliamentary election which for various experts will be characterized by a key political choice between Sovereignists and Europeanists. Shortly before the election, on the 9th of May – Europe Day – Romania will host also an important European Summit in Sibiu with all the European Leaders to discuss and define a new path for the European Union.

The main priorities of the Romanian Presidency of the EU Council are the following:

“Europe of convergence” – focused on cohesion policy and the competiveness European industrial policy. It aims to stimulate entrepreneurship, digitalization and innovation among European industries.

“Europe, as a stronger global actor” – focused on the image and the global role of the EU

“Europe of common values” – focused on the main common values of the EU. It aims to promote and consolidate solidarity, freedom, democracy and respect of human dignity, inside and outside European borders.